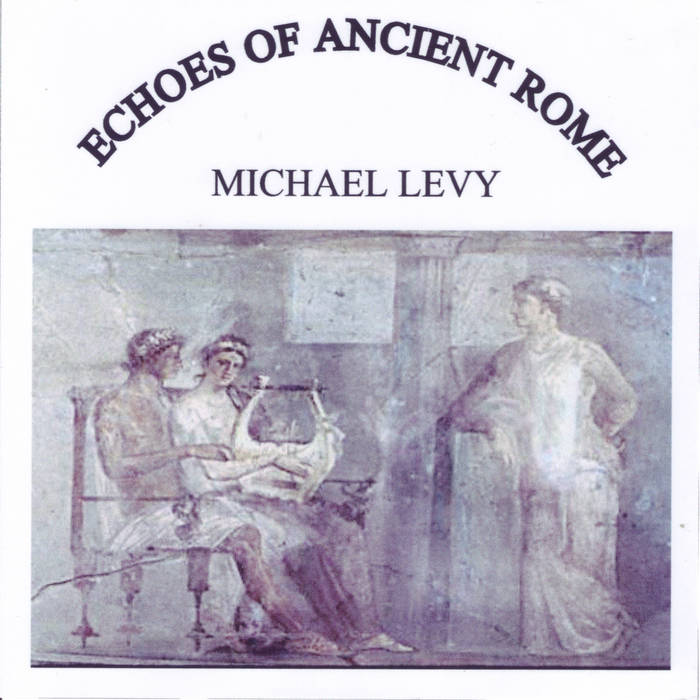 TPM Art should never be measured in terms of good or bad, but rather in how successful it if at evoking reaction. To be blunt, the record is one that cut me to the bone. Levy's compositions are carefully crafted interpretations of similar melodies through the lens of both his artistic eye and his knowledge of classical history. Apart from my own personal attachment to this record, the music stands on its own as an incredible effort to bridge together two epochs through time-honored tradition. Favorite track: The Temple of Mars (Original Composition for Replica Lyre in the Ancient Dorian Mode).

Unlike ancient Greece, tragically, virtually no surviving written music has survived from ancient Rome. These set of composition for my replica Kithara-style lyre is my attempt to restore a precious remnant of the music of ancient Rome, which is now forever lost - so far, all that has been discovered, is one pityful fragment by Terence:

This piece can be heard track 19, on the recording "Musique de la Grece Antique". Here are some more details from the notes for this unque album, about the only surviving fragment of written music ever found from ancient Rome:

"We have added the only surviving musical fragment of
Imperial Rome: four mutilated measures from a work by Terence. It is as if nothing were
left of the Acropolis but a few scattered bits of columns and a pair of ruined capitals"

All the various lyre-playing techniques heard in this album, are authentically based on lyre-playing styles which have remarkably survived from Antiquity & which still can be heard today in the amazing lyres still played throughout the continent of Africa, where unlike the rest of the Western world, a precious remnant of the cross-cultural influences from the around ancient world have miraculously survived.

Some of these lyre-playing techniques include the “block & strum” method, still practiced today by the Krar Lyre players of Eritrea in East Africa – this technique allows the player to strum rhythm & basic chords on the lyre, similar to an acoustic guitar. This technique entails blocking strings with the left hand which are not required and leaving open only the strings which form the required intervals, which then can be strummed with a plectrum in the left hand.

Ancient illustrations of Kithara players seem to infer that this technique was also prominent in Ancient Greece – many illustrations clearly depict the left of the lyre player blocking/dampening the strings with the left hand whilst strumming the open strings with a plectrum in their right hand.

Other lyre playing techniques include the use of tremolo (based on the style of Egyptian Simsimiyya Lyre Players still heard today), alternating between harp-like finger plucked tones played with the left hand, and guitar-like plectrum-plucked tones with the right hand, using basic finger-plucked intervals/chords with the left hand to form a basic harmonic background for the melodic line being played with the plectrum in the right hand.

THE ANCIENT MUSICAL MODES USED IN THIS ALBUM

Due to the known prominent influence of Ancient Greek culture in the Roman world, in order to create an authentic-sounding evokation of what the solo lyre music of ancient Rome may have once sounded, I decided to base the compositions in a selection some of the original Ancient Greek modes, with melodies inspired mostly by a "Musical Adventure in Time Travel" of the Temples of Ancient Rome.

The names of musical modes in use today, (e.g. Dorian, Mixolydian etc) although having the same names as the original Greek musical modes, were actually misnamed during the Middle Ages! Apparently, the Greeks counted intervals from top to bottom. When medieval ecclesiastical scholars tried to interpret the ancient texts, they counted from bottom to top, jumbling the information. The misnamed medieval modes are only distinguished by the ancient Greek modes of the same name, by being labelled “Church Modes”. It was due to a misinterpretation of the Latin texts of Boethius, that medieval modes were given the wrong Greek names!

According to an article on Greece in the New Grove Dictionary of Music and Musicians, the original ancient Greek names for species of the octave included the following (on white keys):

Full details can be found here:

For what Plato & Aristotle themselves had this to say about these ancient musical modes, please see this fascinating link:

For full historical details, including information about my other 9 albums of Ancient Lyre Music, please visit my official website

Michael Levy is a prolific composer for the recreated lyres of antiquity, whose musical mission is to create an entirely new musical genre, which could best be described as a 'New Ancestral Music' - dedicated to reintroducing the recreated lyres, ancient musical modes and intonations, back into the modern musical world.. ... more

Bandcamp Daily  your guide to the world of Bandcamp